Let’s go on Malacca food trail today. I am gong to talk about my breakfast in Malacca. When you visit historic city of Melaka or Malacca the next time, don’t just follow those clueless tourists (both local and foreign) flocking to that same few eateries at Jonker Street area. There are a lot more varieties of delicious and cheap food available in Malakak (in Hokkien). Don’t pronounce it as malakas. “Malakas” is a Greek slang work (literally means wanker!) but the usage of the term varies. It is commonly use as alternative meanings, like an a*sehole or a jerk.(wikipedia)

Anyway, don’t just patronize those few eating places like Jonker Street Delights or Chung Wah Chicken Rice Ball. Do you know you look kind of silly to Melaka folks, waiting in long line under the scorching sun just to eat a normal taste chicken rice?  If you really want to eat the authentic fragrant Hainanese chicken rice ball, then hop over to Muar or Bandar Maharani, which is an hour drive away from Melaka. You get the real deal; the rice balls are much bigger and freshly oozing with fragrant chicken taste.

Let’s get back to Malacca town. When you are in the historic Melaka town, be adventurous. Walk away from the main Joker Street Walk or Jalan Hang Jebat. Stroll around the narrow roads and explore their equally narrow five-foot ways and discover many other local delicacies enjoyed by actual Melaka people or Melakians. 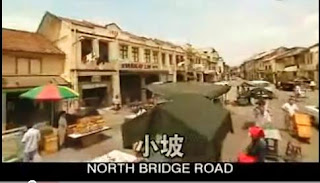 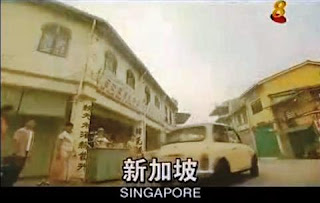 For a start, walk over to Jalan Kampung Pantai. It is very nearby to Jonker Street. This where Singapore MediaCorp TV crew shot their blockbuster 36-episode drama series “Together”. The show was aired over at NTV7  sometime ago. They used this quaint area right in the heart of Malacca lined old heritage Chinese shophouses, as the location for its main outdoor scenes. It is supposed to be a busy street ( North Bridge Road) of Singapore back in the Sixties. 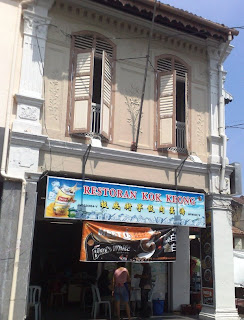 Right on this popular location in Jalan Kampung Pantai, there is this corner shop called Restoran Kok Keong, where there is a stall selling delicious yam rice accompanied with a bowl of pork soup (similar to Bak Kut Teh) for breakfast. The dish is simply called Yam Rice Pork Soup. Actually it is a herbal soup brewed with soya sauce. 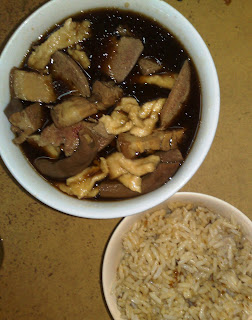 The herbal taste is milder than the usual Bak Kut Teh soup from Kuala Lumpur or Klang. Inside the soup, it is full with pork (consists of pork intestine, pork liver, lean meat) and tofu. The yam rice is simply delicious and fragrance.

This yam rice pork soup stall is patronized by mostly Malaccans. It is opened as early as 8 in the morning till 2 p.m. only.  And it is closed on Wednesday. Check it out on your next trip to the historic and not historical city of Melaka/ Malacca.