Another kartun Malaysia. This one is about a spoof on Reggie Lee cartoon which was published on The Star (13th April, 2011).

Recently there was this concerned about fake eggs selling in Malaysia. It all started by a complaint from a Malaysian housewife in Pulau Tikus Penang.

As reported in Malaysian news, the so-called counterfeit eggs said to have a rougher surface compared to the real one. In addition, the white and yolk of this “fake” egg mixes quickly together, and the yolk was have a more “yellowish” color, after boiling.

Then it was tested and conformed by the Malaysian Veterinary Services Department that they are actually genuine and not fake eggs.

I am not surprised that many Malaysians are unduly concerned about fake eggs. After all Malaysia is notorious for fakes. We have fake doctor, bomoh, Datuk and not forgetting “fake politicians” aka political frogs.

Hope you  enjoy this kartun Malaysia spoof below: 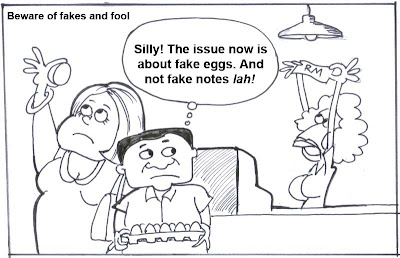 “Just think of how stupid the average person is, and then realize half of them are even stupider!” – George Carlin