Here is one of those Malaysia funny facts: The other night I was watching NTV7 one of Singapore’s most commercially successful and famous film-maker Jack Neo’s movie, entitled “I Not Stupid Too”. This 2006 satirical comedy is a sequel to his earlier popular “I Not Stupid”.

No, I am not talking about Jack Neo’s scandal with Wendy Chong; his two-year-long extramarital affair with 22 year-old then freelance model Wendy Chong Jia Yan. Of course this Singapore film maker Jack Neo Chee keong is no JACKass. 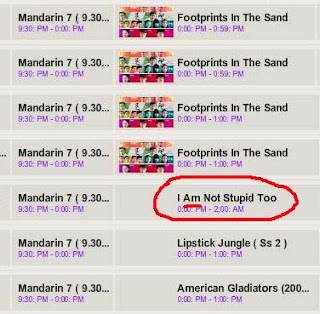 The correct title is “I Not Stupid Too”. There is no verb be “Am” in the movie title. It is meant to be written in, what we called “broken English. The word “Am” was purposely omitted to make the movie title sounds “localized English” or “Singlish” to make it funny. Just like some of Jack Neo’s other movie titles, for instance, “Money Not Enough”, “This One Not Enough”, “Just Follow Law”, “Where Got Ghost?”

Thinking that it was wrongly written, some smart alec in NTV7 changed the movie title to “I AM Not Stupid Too”. Now, I wonder who stupid. Ops! I think it should be, “Now I wonder who is stupid”. Sorry ah!